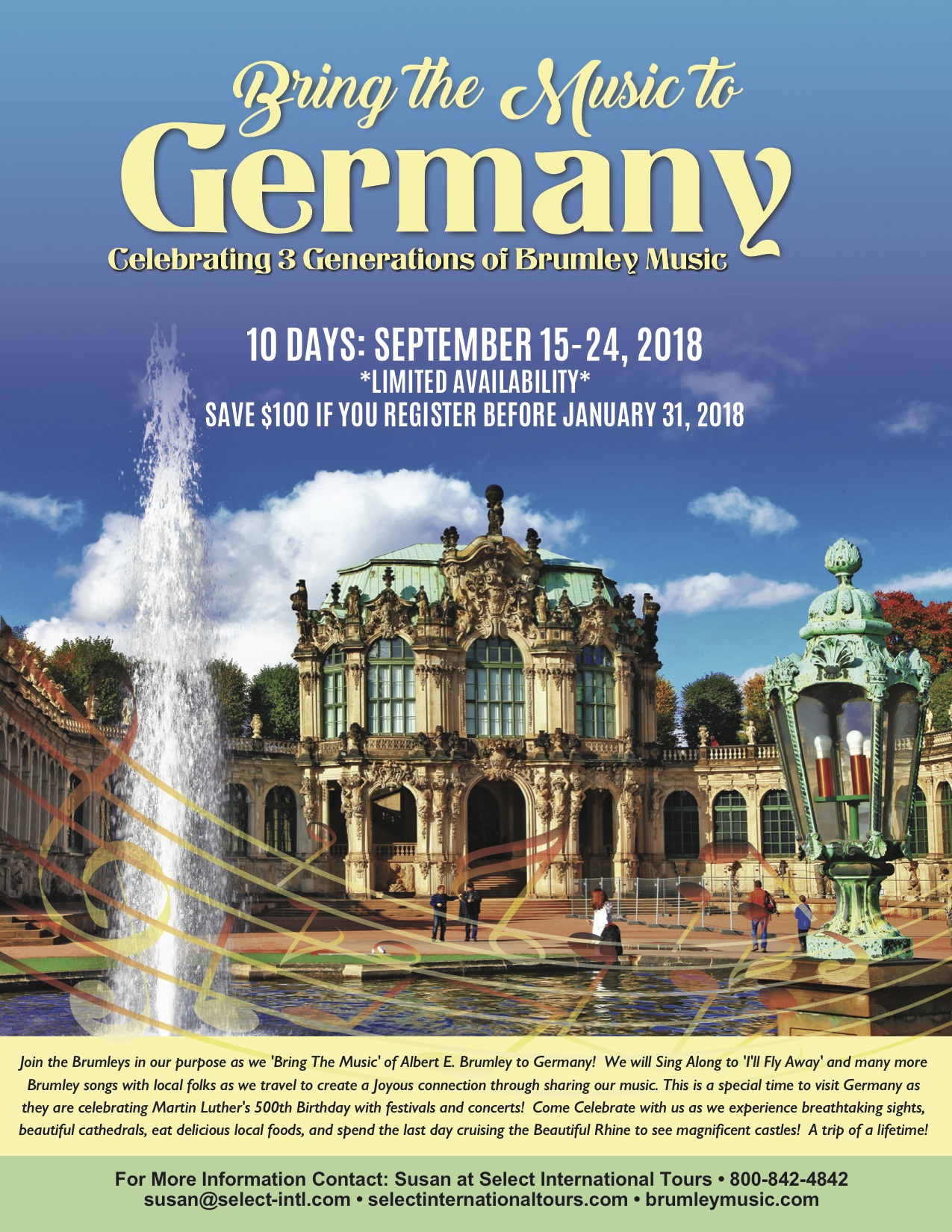 Sun, Sep 16, Day 2: ARRIVAL FRANKFURT- ERFURT
Upon arrival we are met by our German tour director and board the deluxe motor coach. Our destination today is Erfurt. A local guide takes us to see the market square with the magnificent cathedral which houses the world’s largest church bell. We stroll through the streets with the rich timber framed buildings and cross the merchant’s bridge which is lined with picturesque stores. In the 16th century Martin Luther lived as a monk in Erfurt before he later started the Reformation. We also visit the Augustinian monastery with glass windows dating back into the 13th century. We enjoy the welcome dinner in a local restaurant. Overnight Erfurt. (Special Dinner)

Mon, Sep 17, Day 3: DAY EXCURSION TO WARTBURG- EISENACH
Our day excursion takes us to the town of Eisenach to visit Wartburg castle. This fortress is of importance in German history. In the medieval ages a songwriter’s contest took place at the Wartburg, which in the 19th century, Richard Wagner used as a story for his Tann- häuser opera. On our tour we will also be reminded of the life and work of St Elisabeth, the wife of one of the dukes who founded hospitals in the area. From 1521 to 1522 Martin Luther hid here after being placed under an imperial ban. While here, he translated the New Testament into German. We will see the original black-red-golden German flag, used at a student’s meeting at the Wartburg in 1817, which for the first time demanded civil rights and a German Republic. Eisenach also is the birthplace of the famous composer Johann Sebastian Bach. Following our visit at the Wartburg, we visit the museum in his birth house and listen to a demonstration of Bach’s works on historical instruments. We transfer back to our hotel in Erfurt for overnight. Tonight, we’ll have a group dinner in a rustic, “medieval style” restaurant. (B/Special Dinner)

Tue, Sep 18, Day 4: LEIPZIG- DRESDEN
Today we will visit two of the most important towns for classical music in Germany. Our first stop is Leipzig. An old trade center since the medieval ages, Leipzig is the town where Johann Sebastian Bach spent most of his life. He served as the cantor for the Thomas Boys Choir and composed a new cantata every Sunday. On our walking tour, we will visit Thomas Church with Bach’s grave, pass the Renaissance town hall, see the University with its reconstructed facade, and Gewandhaus concert hall. Leipzig also is important for the German revolution of 1989 when thousands of Leipzigers joined prayers for peace in Nikolai church and started marching just with candles in their hands along the ring road. Those marches got the attention of international media and have been one of the main events which led to the fall of the Berlin Wall just a few weeks later.Following our daily lunch and shopping break, we head to Dresden. Called the “Florence of the North”, Dresden is a display of the best baroque architecture north of the Alps. We’ll be amazed by the magnificent architecture of churches and museums. Our tour includes Semper opera house, the Zwinger palace courtyard, and Frauenkirche which was reconstructed less than 20 years after it was destroyed in WWII. Tonight, we will enjoy an exclusive classical concert by young Dresden musicians. They play classical masterpieces written by composers such as Antonio Vivaldi, Wolfgang Amadeus Mozart and Johann Strauss. Overnight in Dresden. (B/D)

Wed, Sep 19, Day 5: MUSIC INSTRUMENTS IN MARKNEUDORF TO EGER (CHEB)
John Lennon, Keith Richards, Bill Wyman (Rolling Stones), and even Elvis Presley, all played Framus guitars. Most popular in the 1950s and 1960s, Framus has been revived and plays an important role in international music again. We are visiting the Framus Vin- tage collection today which displays 200 Instruments from the Framus factory production. From the classical violin, the Attila Zoller guitars, to the legendary Star Bass, the Framus museum collection shows a unique variety for a German instrument manufacturer. The entire area is well known for music instruments manufactories. We will tour factories and workshops in the afternoon and see how violins, tubas, and trumpets are made. Overnight in Czech Republic town of Eger. (B/D)

Thu, Sep 20, Day 6: EGER- NUREMBERG- ROTHENBURG ob der TAUBER
We can’t leave Eger without visiting the Imperial Castle which dates to the 12th century. The picturesque market square with the nicely restored baroque architecture is a must to see. Our en-route stop today is Nuremberg. Starting at the famous Imperial Castle, our tour takes us along major architectural and artistic highlights of the historic city which had its Golden Age in the late middle ages. Artists such as Albrecht Duerer and poet and playwright Hans Sachs reflect the city’s artistic and intellectual progress of that time. Nuremberg also was the first German town, which in 1525 joined the Reformation. Every year in December, Nuremberg is the home of the world-known Christkindles Christmas Market. We continue our journey to Rothenburg ob der Tauber in the afternoon. With its timber framed houses and the medieval town wall surrounding the center, Rothenburg gives us a good understand- ing of what a German town looked like in former times. We enjoy a some free time on our own as we walk around the town and have a look into Käthe Wohlfahrt’s Christmas Museum. In the evening, we join the historic night guard for his inspection and hear his stories from medieval times. Overnight in Rothenburg ob der Tauber. (B/D)

Fri, Sep 21, Day 7: MUSEUM FOR MECHANICAL MUSIC INSTRUMENTS, KARLSRUHE
We have a lazy start this morning, allowing some more shopping in the many souvenir stores in Rothenburg or just taking a walk to the town wall. Today we are visiting the German mu- seum for mechanical music instruments. The collection presents about 500 instruments, dating from the 17th century up to the 1920s. Among them is a self-playing piano which belonged to the first German chancellor Konrad Adenauer, an automated organ which was built for the “Titanic”, as well as many barry organs and automatons. During our guided tour about 30 instruments will be played. We arrive in Karlsruhe in the later afternoon where we join the German “Gospel Church Day.” About 90 choirs, 5,000 singers, and 40,000 visitors are expected for this largest Gospel event in Europe. After dinner, everyone is invited to enjoy the Gospel Night with Gospel concerts in more than 20 churches and other venues all over the town. Overnight in Karlsruhe. (B/D)

Sat, Sep 22, Day 8: EXCURSION INTO THE BLACK FOREST, GOSPEL CHURCH FESTIVAL DAY
Join us on a day excursion into the Black Forest today! We will see beautiful landscapes and dreamy villages. Of course, we will look on the famous cuckoo clocks which originate from this area. We have a Kaffeetrinken (Coffee break) with a good coffee and home made Schwarzwälder Kirschtorte (cherry cake.) We mingle with the participants of the Gospel Church Day in the afternoon again. Music will be played on many open-air stages throughout the town. Tickets for tonight’s grand Gospel Day Gala Concert in Karlsruhe’s Black Forest Dome are included in our tour. Overnight in Karlsruhe. (B/D)

Sun, Sep 23, Day 9 :RHINE CRUISE
Following the breakfast buffet, we head northbound towards the Rhine River valley. We spend the day with an enjoyable Rhine cruise, sailing past magnificent castles and the famous Loreley rock. At the end of the cruise our motorcoach picks us up again and we travel to Rüdesheim. We overnight in Rüdesheim. Our farewell dinner has wine from the area included, and will be a festive meal at the end of this eventful journey. (B/Farewell Dinner)

Mon, Sep 24, Day: 10 RETURN TO USA
Our motor coach takes us to Frankfurt airport for our homebound flights this morning. (B)

RATES DO NOT INCLUDE

Deposits and final payment: A deposit of $500.00 per person by check should accompany the registration form along with your optional travel protection payment, if purchasing, and a copy of your passport picture page by May 31, 2018. Final payment is due by July 15. 2018. Please mail your payment to: Select International Tours, 85 Park Ave., Flemington, NJ 08822 Attn: Susan Prendergast, 800-842-4842, susan@select-intl.com

Airline, seating and special requests: The seats are assigned by the airlines. We do not reserve specific seats. You may change your seat, provide mileage program information and passenger contact information directly with the airlines once the ticket numbers are received. (approximately three weeks prior to departure). All special needs and requests due to medical or dietary restrictions must be requested in writing at least 60 days prior to departure. Business class and premium coach seats are available upon request as are add-ons from your hometown airport. Switching from air and land to land only within 90 days from departure will be charged a $100 service fee and any airline charges.

Single supplement: A limited number of single rooms are available at an additional cost of $595.00 per person cash payment. Prices are based on two people per room. We do not guarantee room mates but will do our best to connect you with a possible share.

Land Only Option: $3,395.00 per person cash price. Land only services start and end at the hotels, unless you are able to meet the group at the airport, and do not include airfare.

Baggage: Each participant is permitted to check (1) suitcase weighing no more than 50 lbs., and one small carry-on bag on the plane. Airline baggage fees are not included. Please check the specific baggage fees on the airline website.

Tour Cancellation Policy: $350.00 non-refundable. 90-60 days before departure a total of $500.00 is non-refundable. Within 60 days of departure all payments are non-refundable regardless of reason for cancellations. All cancellations must be in writing. Unused portions of the trip are not refundable. We strongly encourage you to purchase Travel Protection. Call or visit our website for details on the cost per person for the Group Deluxe and Cancel For Any Reason (CFAR) plans. We encourage all travelers to purchase a plan at the time of initial deposit. See attached travel protection information for details, www.selectinternationaltours.com

Responsibility: By accepting this confirmation, you agree that the Group Leaders and Select International Tours, Inc. have no responsibility for any acts or omission of the travel suppliers in your itinerary and during your trip. We have no special knowledge regarding the financial conditions of the suppliers, unsafe travel conditions, health hazards or weather hazards at locations traveled. We are not responsible for flight delays or cancellations or any charges incurred due to unforeseen circumstances. Unused portions of the trip are non-refundable. For information about destination climate, risks and safety please consult the appropriate on line resources. For health information consult the Center for Disease Control and Prevention. You are responsible for checking passport, visa, vaccination or other entry requirements of your destinations. Itineraries are subject to change and out of our control. We are not responsible for any damaged, lost or stolen articles. We are not responsible for any sickness, injury or death during or after the trip. Travel documents will be mailed out approximately 3 weeks before departure. Please review them carefully for any errors.

Shipping & Handling: $15.00 per person – not included in package price will be added to each invoice. Your invoice will confirm the trip registration.